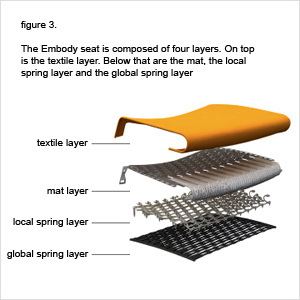 In a world where sitting is more prevalent in the workplace than ever, discomfort can become all too commonplace. Much of this discomfort is tied directly to the pressure the body’s weight puts on the “sit bones” at the base of the pelvis and the surrounding soft tissue. The longer a person sits, the more tissue will be exposed to static pressure loads. Relieving that pressure through innovative engineering is healthier for the sitter.

Cells need oxygen, transported by blood, to burn energy. Blood also carries carbon dioxide—waste from the body’s burned energy—out of the cells. The effectiveness of this process is facilitated through tissue perfusion, a measure of the exchange of oxygen and carbon dioxide within the body’s tissues. It’s the basis for keeping individual cells (and ultimately human beings) alive.

Today, humans are spending less time on their feet due to sedentary work and play activities. Many have a nearly constant connection to computer technology. And those with physical disabilities—especially individuals who spend much of their time in wheelchairs—suffer from the impact of excessive pressure in prolonged sitting. Unfortunately, when a person sits down or lies down, it’s more difficult for the blood vessels to move the blood as effectively to the capillaries due to the increased resistance induced by soft tissue deformation.

In the seated position, the weight of a sitter’s torso—about half his or her body weight—rests on the ischial tuberosities. Even though the buttocks are designed to take this kind of load, the tuberosities, with their small circumference at the base of the pelvis, create peak pressure. (figure 1) This results in compressed soft tissues, reduced blood supply, and less exchange of oxygen and carbon dioxide within the cells. If a person stays static in any position long enough the facilitation of tissue perfusion is impeded.

While all tissues can withstand a certain degree of oxygen deprivation, without adequate tissue perfusion, cells can die. Tissue perfusion is a major concern for people with disabilities who use wheelchairs as their primary means of mobility because carbon dioxide builds up as the metabolic processes—the way the body maintains its chemical balance—power down. In their research, Bogie et al. have suggested thresholds for risk to tissue viability (Bogie et al., 1992, 1995). That’s why, for people with impaired central nervous systems, a range of “alternative” seating surfaces, like gel and air bladder technologies, have been developed for use in rehabilitation—and wheelchair users are taught to do pressure relief push-ups.

In able-bodied sitters, the nervous system is a good indicator of what feels comfortable, informing the body to respond when it’s necessary to accommodate tissue perfusion. (figure 2) It only takes about 30 minutes or less before a sitter begins to fidget, thanks to the nervous system.

Physiologically, fidgeting is what allows the blood to flow through the previously compressed tissues, reestablishing more efficient tissue perfusion. In this respect, a little bit of fidgeting is good, acting as a sort of micro-movement that shifts the pressure off one section of tissue and allowing some blood to reach it. It can take about three minutes for this exchange to clear out all the carbon dioxide and replace it with fresh oxygen. (Makhsous et al., 2007)

However, when people become so uncomfortable that they have to get out of their chair to relieve the pressure on their tissues, it becomes problematic because they’re likely disengaging from their work. That disengagement can translate to a loss of productivity. A well-designed chair seat will enhance this comfort, distributing the body’s seated pressure over a large area, and allowing the sitter to remain comfortably engaged.

People already sit too long and too often in static postures when they work, especially while engaging with computer technology. When they sit without moving they stress their body’s tissues, becoming more uncomfortable, more tired, and less productive. Design Problem

By passively stimulating the tissues that bear the pressure load, a body can maintain a better exchange of oxygen and carbon dioxide, resulting in better function and performance. Dynamic surface pressure on a chair seat—a surface that accommodates the body’s micro-movements—provides more comfort, liveliness, and health-positive benefits to the sitter than non-dynamic surface pressure.Design Solution

Movement is the key to good health, especially when a person is seated. The postural range and shape of a work chair help the sitter move physiologically. Beyond these features, the Embody Work Chair provides zoned support. These targeted support areas in the thighs and pelvis work in concert to conform to the sitter’s body shape. Within these zones are different proportions of tissue—bone and flesh—that need varying levels of support.

The Embody chair supports these variances in tissue—from the popliteal crease at the back of each knee to the sitting bones and all the soft tissue in between—reducing stress on muscles, bones, and skin. The bi-compliant support structure of the Embody chair’s seat, one that includes both a global and a local spring layer, fits the sitter’s body shape, moving with the person as he or she changes position. (figure 3) This contoured, layered design allows for air to flow through the textiles and provides superior thermal comfort.

The seat’s Pixelated Support™ system is designed as a matrix. Each component, or pixel, inherently conforms to the sitter’s weight, distributing the mass evenly on the seat and providing a sensory experience of flotation. The pixels adapt to micro-movements in the shifting of the sitter’s weight. In other words, the chair accommodates, even encourages, movement to enable tissue perfusion, reducing stress on muscles, bones, and skin.

To test the benefit of distributing seated pressure, a prototype with a bi-compliant seat was compared to foam or suspension seat constructions to measure the tissue perfusion of 15 female subjects. Except for an earlier pilot, this is the first known study of tissue perfusion in any population of able-bodied users.

In addition to the standing posture, subjects were randomly rotated through 10-minute sitting trials in each of five different chair solutions including the bi-compliant prototype. Surface oximeters were placed on the subjects’ skin at five locations. These locations would contact the seat surface when the subjects were seated. The oximeters recorded transcutaneous partial pressures of oxygen and carbon dioxide from these areas, and sensors picked up the concentration of oxygen and carbon dioxide electrochemically. Simultaneously, the seating contact pressure was recorded in the sitting area. The subjects sat with 90-degree angles at the knee and hip and ankle, their buttocks to the rear of the chair, and feet flat on the floor. And they were instructed not to shift position during the testing.

Under the ischial tuberosities, the prototype chair, Embody, was best at maintaining the oxygen levels measured in the unimpeded standing posture (figure 4). Subjects’ average tissue oxygen perfusion levels at these locations were significantly higher while seated in the Embody chair than while seated in the Foam B and Suspension B chairs. Given the high pressures the buttock tissues are normally subjected to in the seated posture, these results suggest that Embody presents a healthier alternative. Furthermore, the Embody chair results most closely reflect those of the standing posture, where tissue oxygen perfusion levels are nearly identical across all three measurement locations: ischial tuberosities, proximal thigh, and middle thigh. This underlines the ability of the bi-compliant design of the Embody seat to spread the load across the seat, rather than concentrate it. (Makhsous et al., 2008)

Regarding tissue carbon dioxide perfusion, the Embody seat measured similar advantages over the other seats tested in the study. Again at the location under the ischial tuberosities, the Embody seat results were significantly better than three of the other chairs’ results: Suspension A, Suspension B, and Foam A (figure 5). There were also significant differences between the suspension seats for this measure, underlining the performance differences between constructions that might appear interchangeable.

People are engaging more with computer technology everyday, making sitting more prevalent than ever. Prolonged sitting can impede the flow of blood, and ultimately the facilitation of tissue perfusion. Relieving seated pressure through innovative engineering aids the exchange of oxygen and carbon dioxide, improving the flow of oxygen. This, in turn, brings a healthier seated experience to the sitter, allowing people to stay focused and engaged with their work. References

Gretchen Gscheidle is a product researcher at Herman Miller. Educated as an industrial designer, Gretchen now applies her creativity and problem-solving skills in her role as researcher on cross-functional product development teams. She has been the research link in the company’s seating introductions beginning with the Aeron® chair in 1994. Her research focuses on laboratory studies of pressure distribution, thermal comfort, kinematics, and usability, as well as field ethnography and user trials. Gretchen is a member of the Human Factors and Ergonomics Society and represents Herman Miller on the Office Ergonomics Research Committee. Her work has been published in peer-reviewed journals.

The late Bill Stumpf studied behavioral and physiological aspects of sitting at work for more than 30 years. A specialist in the design of ergonomic seating, his designs include the Ergon7reg; chair, introduced by Herman Miller in 1976 and, with Don Chadwick, the equally innovative Equa® and Aeron chairs. He contributed significantly to the design of the Embody chair prior to his death in 2006. In that same year, he posthumously received the National Design Award in Product Design presented by the Smithsonian’s Cooper-Hewitt, National Design Museum.

Jeff Weber credits his love of furniture design to working with Bill Stumpf, who designed for Herman Miller for 30 years. Weber joined forces with Stumpf’s Minneapolis firm in 1989. That led him to his association with Herman Miller. Weber worked with Stumpf on the Embody chair and, after Stumpf died in 2006, Weber evolved the design at his Minneapolis-based Studio Weber + Associates. In addition to the Embody chair, Weber’s designs for Herman Miller include the Intersect® portfolio, Caper® seating, and the Avive® table collection.