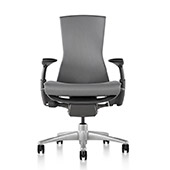 The Embody Chair in the News

“Herman Miller is rolling out retail sales for its Embody Chair, not only through its traditional retail channels, but through a web site that promises to change the way furniture is specified and sold.

SmartFurniture.com launched the ‘3 Minute Embody,’ an online feature that empowers customers to design and order their own custom Herman Miller Embody chair in — you guessed it — three minutes. In addition to the 3 Minute Embody plan, the company has also announced they will be launching an increasing array of custom-design features on the web in 2009, including home office furniture design tools, and office chair and desk space planning tools” (more…)

“Herman Miller Inc.’s latest chair design, the Embody, goes to selected retailers, including online sellers such as smartfurniture.com. The Web-based business said today it has developed a three-minute design site for shoppers to create their personalized Embody chair.” (more…)

“The launch of the 3 Minute Embody coincides with the global retail launch of the Herman Miller Embody Chair on March 2 to select retailers including SmartFurniture.com. This revolutionary design in office chairs took nearly seven years for Herman Miller to develop. The Herman Miller Embody Chair incorporates the research of dozens of physicians, ergonomic, biomechanical, vision, and physical therapy experts who assisted internationally renowned designers Jeff Weber and the late Bill Stumpf in the development of the first ever health-positive chair.” (more…)