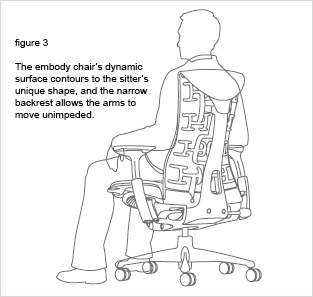 Cardiovascular diseases are the leading cause of death and morbidity in industrialized nations, accounting for about 50 percent of all deaths. Since the 1970s, the prevalence, incidence, and mortality of chronic heart failure have increased (National Institute of Health, 2005), with physical inactivity as a significant contributor to this deadly disease. (figure 1) For people increasingly seduced by computer technology—and the sedentary positions it encourages—seating solutions that benefit the heart might help lower the risk of cardiovascular diseases, and ultimately improve people’s health.

What We Know
Physical inactivity is a risk factor for cardiovascular disease, and it is becoming increasingly prevalent. It ranks similarly to cigarette smoking, high blood pressure, and elevated cholesterol as a contributor to heart ailments. When a person’s activity level declines, the rate of heart disease increases. What’s more, less active, less fit persons have a 30 to 50 percent greater risk of developing high blood pressure (New York State Department of Health, 2008). Only 30.9 percent of U.S. adults report engaging in leisure-time physical activity (American Heart Association, 2008). (figure 2) More than ever, people are opting for sedentary activities rather than active ones.

In addition to lowering risk, a decrease in heart rate can improve cognition. When people feel better, they are less distracted by their physical state, which can lead to better performance. A relationship between heart rate and cognition was suggested by research conducted in the 1960s and 1970s, which revealed that a deceleration in heart rate during the anticipatory period preceding a task was associated with improved cognitive performance (McCraty et al., 2006). And in the 1980s, researchers learned that a decreased heart rate allows the brain to receive sensory information more often, leading to better cognitive performance (McCraty et al., 2006).

People who don’t engage in regular physical activity and who spend a lot of time sitting are already at risk for cardiovascular disease. If they can lower their heart rate, they can reduce their risk (Freedman, 2008). It’s not only a health-positive factor, meaning that lowering the heart rate can improve one’s health, but also a benefit to one’s ability to think, since reduced heart rate is associated with improved cognitive performance.

Work—and play—have changed dramatically since the early 1990s as technology has come to dominate people’s lifestyles. People tend to sit too long without moving. In fact, many chairs restrict the body’s movement. Ultimately the sitter’s internal systems can be affected.

One approach to promoting movement in a work chair would be to design one with a dynamic seat and backrest. Doing so would require a surface that automatically conforms to a sitter’s micro-movements and distributes weight evenly. This would allow the seat to take on the greater burden of supporting more weight while providing stability. It would also reduce seated pressure and increase blood circulation to improve oxygen flow and decrease heart rate.

Another design aspect that can promote movement is the shape of the backrest. A work chair with an upwardly tapered backrest would provide more flexibility to encourage torso movement and allow the sitter’s arms to swing freely. Free to move, the sitter’s chest cavity would open up more than in a chair with a conventional wide backrest allows. As a result, unconstricted lungs could enable a sitter to take deeper breaths, thus requiring fewer breaths per minute.

Taken together, these features would promote movement while seated. And movement, as research has shown, is the key to good health. It keeps blood circulating and oxygen entering the lungs to feed the brain so people can think better.

Design Solution
The Embody Chair was designed with an innovative Pixelated Support™ system, a matrix of pixels that work together in the seat and backrest to conform to the sitter’s movement. Its dynamic surface—a mat layer supported by a local spring layer in the seat and “H-flexors” in the backrest—conforms to the sitter’s unique shape to reduce seated pressure while providing stability.

Embody’s narrow backrest, which was inspired by the human spine, independently adapts to the unique shape and movement of the sitter’s spine. It allows people to move freely and naturally, automatically adjusting to changes in position and the full range of postures. It supports the sitter during large, active movements as well as smaller, passive ones. A sitter’s arms can move unimpeded back and forth, which encourages additional air movement into the lungs. (figure 3)

Underneath these innovations is the Embody tilt, the mechanism under the seat that supports the body’s natural motion without creating intrusive pivot points. Freedom of movement with full support results from the tilt’s three linked support zones: 1) thoracic, 2) pelvic/sacral, and 3) distal thigh. The zones work as a system to encourage freedom of movement and avoid the problems associated with static postures, such as dehydration of the discs in the spine.

To determine the health-positive effects of sitting in the Embody chair, Herman Miller commissioned a research study that measured six cardiopulmonary variables. All subjects (15 male, 16 female) sat in an Embody chair and a conventional foam-based office chair with a wide backrest. They sat in each type of chair for at least two hours. During that time, the following metabolic variables were measured:

The order of the chairs was counterbalanced so about half the subjects first sat in the Embody chair and then the conventional chair; the order of the chairs was reversed for the remaining subjects. The subjects were experienced computer users who performed typical office computer tasks while data was recorded in a laboratory setting. All subjects had to meet qualification criteria, which included the following:

Results revealed for both genders that heart rates were consistently lower during a majority of the tasks the subjects engaged in while seated in the Embody chair versus the conventional chair. Compared with the conventional chair, heart rates ranged from 2.6 to 3.4 fewer beats per minute (bpm) for female subjects sitting in Embody while heart rates ranged from 4.6 to 7.9 fewer bpm for the male subjects (Papanek et al., 2008). When the heart rate changes are extrapolated to an 8-hour workday, a 2 to 3 bpm difference adds up to 120 to 130 beats per hour and over 1,000 beats per day.

Extrapolation of the difference in beats per hour and day was even more dramatic for males. This decrease in heart rate was not a consequence of subjective comfort or opinion of the chair or a placebo. Because of the control methods used in the study, including the counterbalanced order of the chairs and all other variables being equal, the significant decreases in heart rate can be attributed directly to the Embody chair—a cardiovascular benefit to the sitter.

Furthermore, while no statistically significant effects of the chair’s design were associated with respiratory rate or tidal volume (the ability to take deeper breaths) for either males or females in the study, more analysis indicated that the Embody chair may be advantageous from a respiratory perspective for larger subjects, particularly users with a Body Mass Index (BMI) over 30 (defined by the National Institute for Health as obese).

In another study comparing the Embody chair to two chairs with foam seats and two chairs with suspension-material seats, Embody—with its innovative Pixelated Support™ system—performed better than other seat constructions in maintaining oxygen levels in the tissues surrounding the ischial tuberosities (or “sit bones”) of the seated subjects (Mahksous et al., 2008). When pressure is reduced at the sit bones blood circulation is increased to the lower extremities, which improves the flow of oxygen.

This has two important consequences. First, the improved oxygenation of the tissues requires less demand for more blood in the area. Second, the improved circulation helps return blood back to the heart (venous return) which makes it easier for the heart to pump (stroke volume). A higher stroke volume allows the heart to work at a slower pace (decreased heart rate) while still achieving the goal of pumping needed oxygen to the tissue (cardiac output). Thus, the heart performs more efficiently, pumping the same cardiac output but at a decreased heart rate and heart work.

Few chairs target the ability to improve physiological function for people in sedentary—specifically, seated—postures. Embody is the first chair design that significantly affects heart rate across a variety of office tasks, resulting in a positive impact on the cardiovascular system without altering work productivity. In combination with the results from previous studies examining tissue perfusion, the Embody chair demonstrates a unique ability to enhance perfusion to the lower extremities while simultaneously doing so at a decreased cardiac workload. The decrease in heart work or decrease in heart rate can lead to a decrease in the risk of cardiovascular disease for those who sit in the Embody chair, even as they move through the full range of postures.

The world of work—and play—demands more use of technology every day. And people are getting more sedentary because of it. Sitters who use a chair that’s good for the body and reduces the risk of cardiovascular disease can improve their health as well as their cognitive performance.

PubMed Central(PMC), U.S. National Institutes of Health (NIH), 2005, (accessed September 12, 2008).
Credits
Gretchen Gscheidle is a product researcher at Herman Miller. Educated as an industrial designer, Gretchen now applies her creativity and problem-solving skills in her role as researcher on cross-functional product development teams. She has been the research link for the company’s seating introductions beginning with the Aeron chair in 1994. Her research focuses on laboratory studies of pressure distribution, thermal comfort, kinematics, and usability, as well as field ethnography and user trials. Gretchen is a member of the Human Factors and Ergonomics Society and represents Herman Miller on the Office Ergonomics Research Committee. Her work has been published in peer-reviewed journals.

The late Bill Stumpf studied behavioral and physiological aspects of sitting at work for more than 30 years. A specialist in the design of ergonomic seating, his designs include the Ergon® chair, introduced by Herman Miller in 1976 and, with Don Chadwick, the equally innovative Equa® and Aeron® chairs. In 2006, he received the National Design Award in Product Design presented by the Smithsonian’s Cooper-Hewitt, National Design Museum.

Jeff Weber credits his love of furniture design to working with Bill Stumpf, who designed for Herman Miller for 30 years. Weber joined forces with Stumpf’s Minneapolis firm in 1988. That led him to his association with Herman Miller. Weber worked with Stumpf on the Embody chair and, after Stumpf died in 2006, Weber evolved the design at his Minneapolis-based studio Weber + Associates. In addition to the Embody chair, Weber’s designs for Herman Miller include the Intersect® portfolio, Caper® seating, and the Avive® table collection.