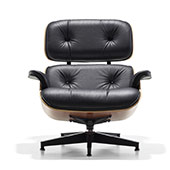 The historic, practically unprecedented Eames Lounge Chair is the fulfilled dream of Charles and Ray Eames, a product of the world-renowned Office of Charles and Ray Eames, and it took a great effort, clear thinking and creativity to combine the disparate elements of their various inspirations and ideas into the fully realized product that Eames Lounge Chair and Ottoman would eventually become. The influences on the Eameses and the influences on the chair itself are many and disparate.

“A special refuge from the strains of modern living”

The very first Eames Lounge Chair was one of a kind, made for the great film director Billy Wilder. Wilder would often rig up a makeshift lounge chair for himself while he was on set, so he could take brief naps to collect his thoughts and re-energize between takes. This image, of seeing their friend Wilder find solace and a parcel of relaxation is these handmade chairs while the chaos of the film set went on all around him, was the original inspiration to make the chair.

Charles Eames said the primary spark for the chair’s look and feel was an old catcher’s mitt he owned as a child. He said he thought of the human body as a baseball, sinking comfortably and correctly into the inviting, soft leather of the mitt. The finished product of the chair owes a clear debt to this fanciful but brilliant mental picture. The soft black leather and well-polished, gently curving molded plywood convey all the comfort, Americana, and sense of place that your old well-loved baseball glove did. This kind of mental freedom, creativity, playfulness, defined much of the work done by Charles and Ray Eames—a spirit not just of taste or practicality, but of whimsical, quixotic notions birthed into reality by flexible imaginations.

The Eames Lounge Chair and Ottoman is the premier chair in American design. Built by possibly the two greatest furniture and design minds of the last century, constructed of natural materials shaped and intermingled with techniques from modernity, it has an unparalleled pedigree. Ray and Charles Eames used everything they’d learned in their long career together, all the tools, techniques, ideas and inspirations, and focused them all on this luxury-defining piece of furniture. From the day it was released it has been looked on as a classic of the industry, and has now become the absolute gold standard for every chair and lounge in the world. This is a chair on display in the permanent collection of the Museum of Modern Art and the Art Institute of Chicago. It is a chair about which documentary films have been made, books have been written, and critics have expounded at length. It is handsome, well-made, perfectly balanced, beautiful, luxurious, elegant, and deeply comfortable. There is no chair extant that can match the Eames Lounge Chair and Ottoman in style, quality, and enduring sky-high regard.

That’s quite a lot of praise. But the Eames Lounge Chair is more than up to earning every piece of seemingly hyperbolic praise launched its way. The lounge chair has stood up to half a century of inquiry, praise, fashion, and criticism, only to come out on the other side an all-time classic rather than just a modern one. It has become something of a singularity in the world of industrial and furniture design; no chair has ever been praised so highly, so universally, and for so many different reasons than has the Eames Lounge Chair. This phenomenon is a product of several combining factors; the originality of the design, the intermingling of nature with the modern world, the unsurpassed work and reputation of the creators, and the pure, simple comfort of the chair, also unsurpassed.

From the moment it arrived on the scene, to the years in which it was brought into the permanent collections of the most respected art museums in the country, to the subtle changes that have made the modern Eames Lounge Chair what it is today, this product has maintained all the integrity of the original design, and the original designers. The design responds to the curvature of the earth, the curvature of nature, and the intermingled, deeply complex relationship between nature and the modern world. That’s “nature” two times in once sentence, if you’re counting, but it’s not overstatement; for the Eameses, there was nothing more important, because there was nothing more inspiring and brim-full with ideas and forms. Nature for them was a ready-made template, a long list of fascinating, organic designs they were at liberty to play with. Like the prairie style architecture of Frank Lloyd Wright, the Eameses built a reputation for work that responded and communicated with natural forms and natural ideologies.

That isn’t to say the furniture is a direct reflection of natural forms; it represents the compromise between them and the modern world. The Eames Lounge Chair is made up, in large part, of wood. However, it is plywood, and molded plywood to boot. This molding made it possible to create impossibly smooth and perfect curves which should be unattainable using bent wood. In addition to the modern processes used to mold the chair, the additions of leather, rubber, and metal complete the sense of interdependence, nature responding to human invention, and both giving way to remarkable comfort and aesthetic achievement.

The Eameses made the very first Eames Lounge Chair and Ottoman as a gift to legendary filmmaker Billy Wilder, who they’d noticed had been rigging up makeshift lounge chairs during his shoots to take short naps. The Eames chair was modeled on the angles of Wilder’s creations, and by the feel and look of “a well-used first baseman’s mitt,” according to Charles Eames. The materials of the chair weren’t hard to come up with: The Eameses had been champions of molded plywood since the 1940s, when the Navy had commissioned them to use their new material in making stretchers, splints, and glider shells. Some are surprised that the chair was built so many decades ago; it’s a truly timeless design, and nothing about it gives away its age or long history (except, possibly, its excellence). Charles Eames said his goal for the chair was that it be “a special refuge from the strains of modern living.”

And is it ever. The most important (and most surprising, if you’re a student of modern chair design) attribute of the Eames Lounge Chair and Ottoman is that it’s comfortable. More than comfortable: luxurious. Even the most brilliant designs of the modern architectural/design movement usually don’t last long in the homes of art lovers, because they can’t compete with the comfort of a simple armchair or couch. But the Eames Lounge Chair and Ottoman matches any piece of furniture in the comfort department, and knocks it out of the park when it comes to design. It’s a win-win, for both the owner and the designers. The Eameses wanted you to slip into their chair, “relax” into it. It’s an escape hatch from modern anxiety and and a hurried world.

The Eames Lounge Chair and Ottoman is a generational inheritance. While the chair is responsibly made out of common wood stock and responsibly manufactured with 24 percent recycled material (and is itself 29 percent recyclable), this is a chair you won’t be recycling. A classic of modern design that has earned its place in museums and living rooms alike, this is a chair for your children, and your children’s children. An unparalleled classic of design, with an unparalleled insistence on comfort and familiarity, it’s a family chair that will last a long, long time.