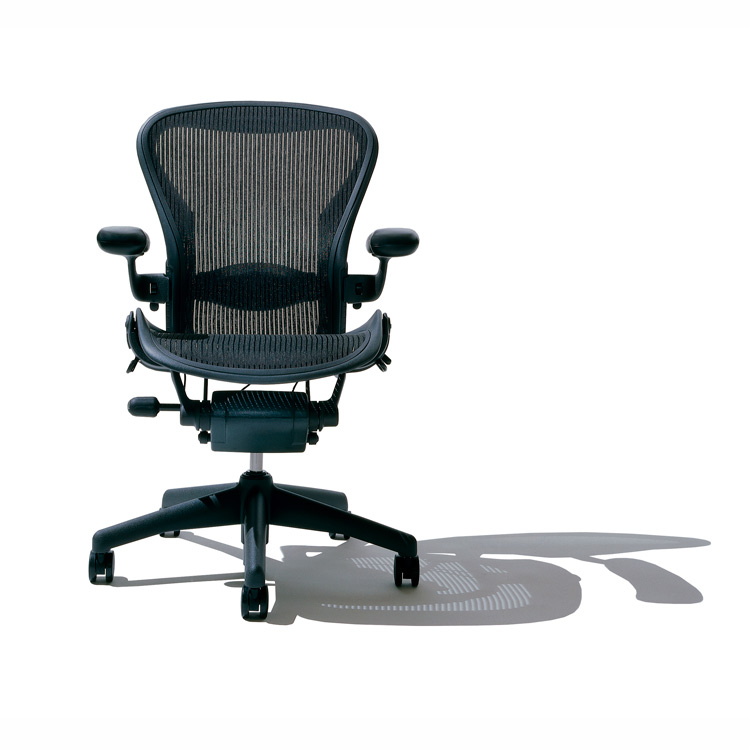 For a design piece to land in the Museum of Modern Art, it has to pass some remarkably high standards. The Museum is known as one of the leading museums of modern and contemporary art in the world.

To wind up in the permanent collection at the Museum of Modern Art in New York City, a piece has to have a pretty impressive resume. So the folks at Herman Miller made sure that the Aeron Chair had just that – a resume indicative of the inspiring creativity and fresh genius that went into creating the piece now known as the best-selling office chair in the world. According to the Museum of Modern Art’s mission statement, the museum strives to represent established and experimental pieces of work, from the past to the present, with an eye toward both modern and contemporary forms of art.

The Herman Miller Aeron Chair is recognized for its cutting-edge design, comfort, and excellence in ergonomics. Given as a gift to the museum from Herman Miller’s employees, the chair has been a part of the museum’s permanent collection since 1992. Aeron certainly found its place in the museum’s architecture and design collection. Recognized for its beauty in design, ergonomic technology, and overall comfort, the environmentally-friendly chair has become an office icon and is known around the world for changing the way office chairs are designed.

Herman Miller, along with designers Don Chadwick and Bill Stumpf, designed the Aeron Chair to be cutting-edge and creative in ways designers had never thought of before. When the design duo teamed up with Herman Miller to create the piece, they viewed their creation through a fresh lens. While both men had designed office chairs in the past, this time they approached things in a completely different way. At the time Chadwick and Stumpf were designing the Aeron Chair, the office chairs on the market lacked the total package. Bulky and predictable, the status quo for office chairs left a lot to be desired. With this knowledge, the designers and Herman Miller set out to completely revolutionize the way office chairs functioned in the workplace.

The Herman Miller Aeron Chair has a distinctive look. Mimicking the curves of a human spine, the chair has sleek lines that curve in unexpected places. After years of research, the team at Herman Miller designed it to be both beautiful and functional. Offering unparalleled comfort and aesthetically pleasing lines, the chair fits seamlessly into any office space, thanks to the many customization options available. The Museum of Modern Art in New York City celebrates modern and contemporary art and strives to have the best collection in the world.

The museum’s curator, Ann Temkin, was quoted in The New York Times in 2008 as saying she hoped the museum’s galleries were “constantly full of unexpected revelations.” The Herman Miller Aeron Chair is certainly unexpected. At the time that the chair was released, office chairs just didn’t look like that. Office chairs were padded, bulky, and full of foam stuffing. The sleek lines and natural curves of the Aeron were surprising to many – and definitely unexpected. In fact, during one of Herman Miller’s many tests, testers described the chair as reminding them of something from an alien planet. It was clear the world had not experienced anything like the Aeron Chair before. The beauty of its design was only the beginning of the unexpected revelations regarding the chair. One only has to sit in the Herman Miller Aeron Chair to realize that the surprises keep on coming.

The folks at Herman Miller did not set out to design and manufacture an ordinary office chair. On the contrary, Herman Miller and designers Chadwick and Stumpf wanted the Aeron Chair to achieve ergonomic excellence. This desire is evidenced by the fact that Herman Miller researched and tested it for a decade. Research, like pressure and thermal mapping, didn’t stop after the first Aeron Chair was released.

Herman Miller persisted and continued to strive to improve the already impressive chair that was taking the design world by storm. Herman Miller developed a unique partnership with a former chiropractor that owned a prominent clinic for back pain. Dr. Brock Walker partnered with Herman Miller and designers Chadwick and Stumpf to make the Aeron Chair the best ergonomic chair of its class. This brain trust came up with several design and engineering strategies to accomplish their lofty goal, but the most well-known is called PostureFit. To an outsider, it seems as though the designers knew exactly what every office chair user has dreamed of – a chair that would provide support no matter how one sat in it. This is exactly what PostureFit aims to do.

Once again, Herman Miller surprised the world with an unexpected revelation. No matter how the user sits, the Herman Miller Aeron Chair provides the same necessary back and leg support that perfect posture would provide. Users can say goodbye to rigid postures and hello to the ultimate in support and comfort.

The Aeron Chair’s looks can be deceiving. When Herman Miller first showed it to test groups, some participants wondered if the chair would actually be comfortable. Office chairs on the market at that time were made with foam stuffing, giving the chair cushions a bulky look. The chair was quite a change, in many ways, from the typical office chairs users had seen before. Herman Miller created a patented Pellicle material to cover the Aeron Chair.

This fabric was breathable, creating aeration that kept the user cool and comfortable throughout a long day of sitting at in the chair. Covering both the seat and back of the chair, the Pellicle fabric creates its own ventilation system. Combined with patented fabric and PostureFit, the design of the Herman Miller Aeron Chair had the user in mind at every stage of the design process. For example, instead of designing the chair to look and function like those before it, Herman Miller and designers Chadwick and Stumpf took an entirely fresh approach. The back of the chair curves, similarly to the natural curve of one’s spine, providing total support.

While some office chairs seem to have forgotten about the ever-important lower-back region, the Aeron Chair is designed in a way to support even the small of one’s back hour upon hour. Because of the PostureFit technology developed by Herman Miller, users can sit in the Aeron Chair in a myriad of positions, and know they are continually supported. Herman Miller designed the chair in a way that understands the need for personal preference. Individuals can choose to sit in the Aeron Chair any way they feel the most comfortable and relaxed, and they can have the reassurance that they are supporting their back and body no matter how they choose to sit.

The Aeron Chair is the total package. Not only is it a thing of beauty, but it’s intuitive and a smart chair as well. No matter how you sit in the chair, the PostureFit technology ensures the chair will support you throughout your day, providing the utmost comfort. What more could one ask for in an office chair? Well, the folks at Herman Miller went one step further and made sure the chair they designed was environmentally friendly. A whopping 94 percent of the Aeron Chair is recyclable, making this best-selling office chair a popular buy among those who want to reduce their footprint on the planet. Herman Miller’s desire to make the chair sustainable and green resulted in an MBDC-certified silver designation, as well as GREENGUARD certification, and has helped businesses who are working toward their LEED certification.

Once you know the history and attributes of the Herman Miller Aeron Chair, it’s easy to see why this award-winning piece wound up in the Museum of Modern Art in New York City. Through ground-breaking research, testing, and creative genius, Herman Miller and its design team created a chair that paved the way for a new generation of office chairs. The chair broke into the design world with a bang, and its best-selling office chair status proves it’s still making an impact on people around the world.