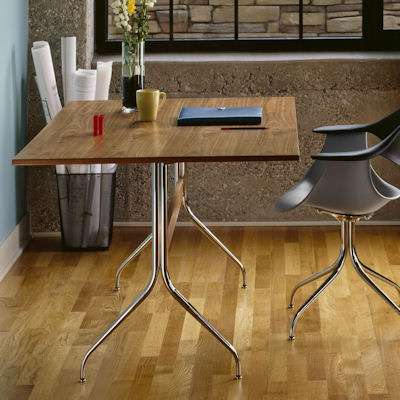 The history of Herman Miller and the now-famous Herman Miller furniture line began when an ambitious young man found himself at the helm of a new furniture company in Zeeland, Michigan. Star Furniture Company, a traditional bedroom furniture manufacturer, had opened its doors for business in 1905. As the business grew and they needed more employees, the company hired 18-year-old D.J. De Pree to serve as a clerk for the newly renamed company, Michigan Star Furniture. Ten years later, this young man had proven himself, worked his way up the ranks, and was named president of the company in 1919. After De Pree had a few years as president under his belt, he approached his father-in-law, Herman Miller, with a business proposition. De Pree asked Miller to buy the majority of the shares in the Michigan Star Furniture Company. Miller was convinced by his young entrepreneurial son-in-law, and the Herman Miller Furniture Company was born in 1923. De Pree served as president of the newly named company, and it continued to produce traditional furniture for the home until 1930.

Soon after the Herman Miller Furniture Company was born, the Great Depression hit, causing De Pree to evaluate the direction of the company and consider how to keep the business afloat. In 1930, De Pree had a serendipitous meeting with designer Gilbert Rohde at the company’s new showroom in Grand Rapids, Michigan. Rohde, a modern designer from New York, convinced De Pree to move away from traditional furniture and shift the focus of the company toward products that would resonate more with Americans’ ever-changing lifestyles. In the early 1930s De Pree altered the company’s path, and Herman Miller became the first company in the United States to produce modern furniture for the masses. Three years after De Pree’s meeting with Rohde, Herman Miller debuted Rohde’s designs at the Century of Progress Exposition in Chicago. In hindsight, D.J. De Pree took a well-calculated risk to shift the company’s focus to modern design, and Herman Miller has benefited from his decision ever since. In 1939, the company opened its first showroom in Chicago’s famous Merchandise Mart to showcase Herman Miller furniture. Not quite ten years after Herman Miller showcased its first line of modern furniture, Gilbert Rohde again partnered with the company to design office furniture. Rohde’s Executive Office Group now serves as a great milestone in Herman Miller furniture history, because it was at this time that the company entered the office furniture market, something it is now famous for around the globe. The Executive Office Group served as a predecessor to the office furniture systems that Herman Miller produces today.

From this point on, the company developed many lasting relationships with well-known designers like George Nelson, Isamu Noguchi, Bill Stumpf, Don Chadwick, and Charles and Ray Eames. When Gilbert Rohde passed away in 1944, De Pree began looking for a new design director for the company. Much like the unexpected meeting he had with Rohde in Grand Rapids, De Pree noticed George Nelson’s work and his sought-after Storagewall design in an issue of Life magazine. Upon meeting Nelson, De Pree offered him the Design Director position at Herman Miller, and Nelson was the first person to hold this title at the company. With Nelson at the helm of the design department, Herman Miller began to take shape as a well-respected modern furniture company. In addition to designing a logo for the company, Nelson created a new corporate image for Herman Miller furniture. In 1946, the company began to recruit other modern designers to collaborate with on future products.

It was at this time that the Eames’ relationship with Herman Miller began. The design power-couple, Charles and Ray, worked with a unique material, molded plywood, and they had been sought after by the United States Navy to design lightweight splints and stretchers to be used in the field. In addition to military contracts, the couple had designed their famous molded plywood chair, lounge chair, folding screen, and coffee table. They were well recognized for their cutting-edge design, and the New York Museum of Modern Art created their first one-man furniture exhibit for Charles Eames to showcase his new furniture. De Pree and Nelson were well aware of the Eames’ work, and they successfully forged an exclusive partnership with the couple that would have a tremendous impact on the future of Herman Miller furniture and design.

By the early 1990s, several pieces (like the Eames Storage Units and Molded Plywood Screen) had long been discontinued products. But in 1994, the company returned to its residential furniture roots with the launch of Herman Miller for the Home. This collection offered new designs along with several classic pieces that were reintroduced from the 1940s, 1950s, and 1960s. Now at the start of the twenty-first century, the company has continued to introduce new pieces that have radically altered the way modern furniture is designed. With breakthrough technology, like PostureFit, the company has created award-winning chairs like the Aeron and Mirra Chairs for use in the home or office. Organizations around the world recognize and respect Herman Miller for its excellence in design. Named the “Most Admired” company in its industry by Fortune magazine over a dozen times, Herman Miller continues to gain admiration as an innovative company known for quality products built with the user in mind.

Much of the company’s values can be traced back to its founder, D.J. De Pree. His experiences greatly shaped his approach to business. Herman Miller greatly values its employees and believes in employee participation and inclusiveness. The history of this corporate value goes back to experiences De Pree had in 1927. That year he founded the Herman Miller Clock Company, which made traditional clocks. An employee of the new company died on the job, so De Pree went to visit with the employee’s widow. During this visit, she read De Pree poetry that was written by her late husband. This experience so moved him that De Pree made a commitment to treat all company employees as individuals who possessed “special talents and potential.” Today, the company describes its commitment to employees in this way: “We value the whole person and everything that each of us has to offer, obvious and not so obvious.” De Pree greatly influenced the business practices and values held by Herman Miller as a company.

In addition to De Pree, Dr. Carl Frost, an assistant professor at Michigan State University, also had a lasting impact on the company’s values. In 1950, Frost began asking the company’s leaders tough questions about their equity and leadership practices. Surprised by his bluntness, D.J. and Hugh De Pree asked Frost to serve as a consultant with Herman Miller. Frost accepted and convinced them to implement the Scanlon Plan, a program that encouraged employee participation and profit sharing. Frost and D.J. De Pree held a similar workplace philosophy, and their values transitioned to become corporate values held by all employees at Herman Miller today. In 1983, the company established a unique stock-ownership plan for all employees, classifying them as shareholders of the company. In keeping with the Scanlon Plan, Herman Miller also cultivated an environment that encouraged ideas and creative thinking. In 1989, a group of employees joined together to create the Environmental Quality Action Team (EQAT), a committee of employees that coordinates and sets environmental policies and programs companywide. These employees approached senior management with their ideas, and the company supported their efforts and continues to implement the policies set by EQAT today.

The history of the company’s growth over time is remarkable. In 1939, the company was opening its first showroom in Chicago’s Merchandise Mart. From that point on, company growth increased every year with more plants, offices, and showrooms opening around the country and eventually around the world. Just three years after opening that showroom in Chicago, Herman Miller opened a second showroom in Los Angeles, California. As the company began to bring on more designers who were producing specific product lines, new manufacturing sites had to be created. In 1949, all of the company’s molded plywood manufacturing for the Eames designs moved from Grand Haven, Michigan to Zeeland, Michigan. In addition, another manufacturing plant opened that year in Venice, California, a site that later became the Eames Studio.

Herman Miller was a booming business, and in 1958 the company began building its headquarters complex in Zeeland. George Nelson, design director, was the primary architect of the project. At the same time that construction was underway in Zeeland, the company was embarking on two other major projects — a new plant in Venice, California and a showroom in San Francisco, California. With a company of growing proportions, the decision was made to incorporate, and the furniture company became known as Herman Miller, Inc. in 1960. D.J. De Pree became chairman of the board, and his son, Hugh De Pree, became president and CEO of Herman Miller Inc. In the same year the company was incorporated, the Herman Miller Research Division was opened in Ann Arbor, Michigan, further expanding the company’s reach and improving the company’s ability to incorporate the latest technology into its products.

By 1966, the company had almost 150 dealers in its network and had extended its presence into Africa, Australia, Canada, Central and South America, Europe, Japan, the Near East, and Scandinavia. Herman Miller, United Kingdom formed in 1969, and Chippenham, England later became the site of the company’s European headquarters, VillageGreen, in 2006. Facilities began to spring up around the world. The second facility in the United Kingdom was opened in Bath in 1970, and additional sites in England and France were built in the mid-1980s. At the same time European sites were exploding, new dealerships were opening in Korea, Malaysia, and Australia, furthering the company’s reach around the world. The company continued to grow its business, adding new products, new employees, and new sites around the world. One of the most visited and well-known facilities is the MarketPlace, built in 2002 near the headquarters in Zeeland. The building’s design is known for being open, and it incorporates numerous environmentally-conscious building practices. Most recently, in 2007, Herman Miller took steps to support the ever-growing customer base in Asia by building two factories and a national headquarters in China. Ningbo, China serves as the company’s manufacturing operations, while Shanghai houses the main office.

Company leadership changed hands over the years, oftentimes within the De Pree family. In 1969, D.J. De Pree stepped down as chairman of the board, and his son took over. One of the first milestones under Hugh De Pree’s leadership happened in 1970 when Herman Miller began offering stock to the public. The new stock certificates were designed by none other than the Eames Office. Leadership changed hands again in 1980 to another De Pree family member, Max, who served as chairman and CEO. The first CEO of the company that wasn’t a member of the De Pree family was Dick Ruch, who was named head of Herman Miller in 1987. Max De Pree continued to serve as chairman of the Board of Directors until his retirement in 1995. The president and CEO post continued to change hands, first with J. Kermit Campbell in 1992 and again with Mike Volkema in 1995. The company was extremely successful, and by the year 2000, Herman Miller furniture sales had reached nearly $2 billion.

Throughout its history, the company has taken risks and responded to changing environments in order to offer its customers high quality products that focus on their specific needs. Through collaborative relationships with talented designers, the company continues to gain recognition throughout the global community as a company known for its innovation, problem-solving design, and quality.