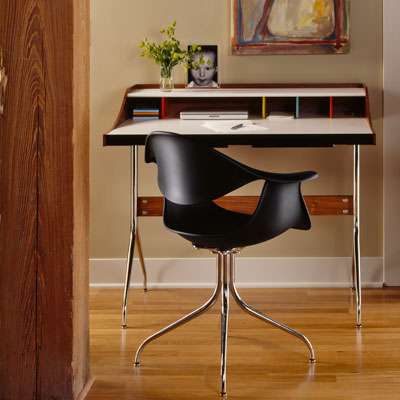 George Nelson, the originator of the Nelson Swag Leg Collection, was one of the more important designers of the last century. He made his name primarily in industrial design, but he also worked in urban architecture, and as a journalist. He was a great businessman as well, and Herman Miller enjoyed great success and growth during his time as a creative director. He was also a wily talent scout; he found Charles and Ray Eames at an exhibition in New York, and quickly brought them into the Herman Miller fold. He was, in sum, a very impressive artist.

In his most enduring collection, the Nelson Swag Leg Collection, you can see very clearly why he is held in such high esteem, and why his furniture is still so popular today, many years after he first created it. The design elements that went into each piece in the series are fascinating, technologically advanced, and architecturally and aesthetically strong. When you bring one of these pieces into your home, you’ll be bringing more than history, more than beauty and more than utility; you’ll be bringing in great industrial design.

The first piece in the series is the most important in terms of design, because it set the template for all future pieces. Of course you can’t talk about the swag collections without talking about the process that gives them their name; “swaging.”

Swaging is a process that bends and sculpts finished metal by use of high pressure. Before Nelson got his hands on it, it was predominantly an industrial and military process. No one had ever really thought to use it in furniture, the province of wood and intensive man hours in carving and sculpting. But Nelson’s interests were far ranging, and he had an itch to discover a process through which metal legs could be easily and relatively cheaply accomplished. In an earlier meeting at Herman Miller, he had asked the group, rhetorically, “Wouldn’t it be beautiful to have some kind of sculptured leg on a piece of furniture?” They all knew the answer was yes, they just weren’t sure how that could be accomplished without considerable man hours and expense. Swaging was the answer to the quandary.

Above, the Nelson Swag Leg Work Table, Armchair, and Desk.

And the legs the process creates are truly lovely. The elegant, tapered legs add an aesthetic and technical dimension to the furniture that it would be much the poorer for lacking. Not only is the metal super strong and supportive. It’s also finished, polished, and easy to produce; that makes the furniture more democratic and available to middle class homes and offices. That availability was always a large part of George Nelson’s design philosophy. He believed in democratic space that allowed for a more equal distribution of art, beauty, design, furniture. It was Nelson who contributed the plans for the first downtown pedestrian mall, and Nelson who led the charge in making Herman Miller popular and affordable, and no longer the exclusive province of the wealthy and the large corporation. He emphasized these ideas in nearly everything he did, but never more clearly in the Nelson Swag Leg Collection, including the desk, chair, work table, and dining table.

Beyond the legs, the desk was extremely useful. It was small and slight, easy to move and carry, and that made it a real asset in modern homes. It could fit in almost any space and be moved very easily. It was a flexible work desk, not the most common thing at the time. It also had a unique shelf on the back and top, which provided display space and storage space at the same time. One of the reasons that Herman Miller is offering this furniture at the present moment is because these storage spaces are now perfect for laptops, external hard drives, MP3 docks, and dozens of other small, sleek, modern appliances and technological gadgets/work implements. This is furniture ahead of its time.

The Nelson Swag Leg Chair isn’t just ahead of its time — its a combination of two different designs that were both far ahead of their contemporaries. The top of the chair owes its distinctive molded plastic shell to Charles and Ray Eames, who gave their permission to Nelson to use the technique (the three designers were close friends). The bottom of the chair uses the swag legs in a new and breathtaking way. They are gathered at the bottom of the seat like a bouquet, then splayed out at the bottom to create a solid and unshakable base. The Nelson Swag Leg Chair is truly a thing of beauty, and it takes an already impressive technological innovation, the swag leg, and makes it even more beautiful and impressive through clever design.

It’s also an improvement on the Eames model of molded plastic. The Nelson Swag Leg Chair creates space between the seat and the seat back. This does two things, both of them great design. For one, it lets air pass through the chair. One of the main complaints about the originals were that they could get hot; heat could build up between the body and the plastic, and create sweating and discomfort. The “open” back relieves this. But the space created also creates hinge points, at the juncture of the arms. This makes the chair more springy, able to move under pressure, and therefore more comfortable to lean back in, and to spend long hours sitting in. Great design is taking what’s there and making it better and more beautiful. The Nelson Swag Leg Collection is great design.

The Nelson Swag Leg Tables, both Round Dining and Rectangular Dining, as well as the Work Table, are the hard-working complements to the chair and the desk. They are there to accentuate, to connect, and to serve their users. Using the sames legs and design techniques evidenced in the chair and the desk, they work together to create a complete home design system, one where the work world and the home world find a comfortable nexus. They are egalitarian as well, allowing for extra space and the creation of a home cubicle (the work table) or for easier communication and fellowship (the dining tables, which are on the intimate side).

The entire series is tied together with the legs, a clever industrial practice used to fit the needs of the designer and buyer. And that’s what Herman Miller is all about. Smart Furniture is very proud to partner with Herman Miller to offer our customers the re-issued Nelson Swag Leg Collection, available now in its original glory. Get your piece today.