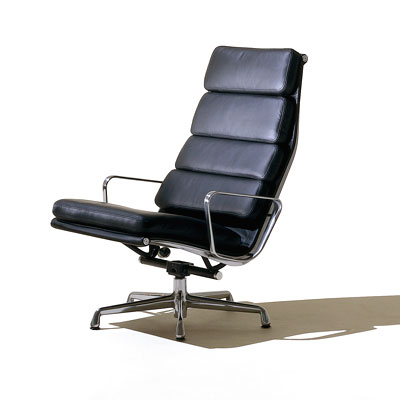 Every great piece of furniture has a fascinating design story. It’s natural; to be great, a piece of furniture has to come from a highly creative mind. It has to be innovative in some way; it has to be different from everything else that’s out there. It also has to be comfortable, supportive, and functional, and for many designers attaining those qualities is an arduous journey in and of itself. But there are few design stories with the energy and interest of the ones supplied by Charles and Ray Eames, generally agreed upon as the two greatest designers of the 20th century. Their furniture changed the world of industrial design forever, and they are credited with some of the most breathtaking, groundbreaking, and all out gorgeous pieces ever created. They worked in quantity as well as quality, with a high energy level that kept them working hard for decades.

They produced work from their studio, the Office of Charles and Ray Eames, which even today is still running (family members keep it going to serve the memory of Charles and Ray and of their creative projects) and producing material. The office was always crowded, always busy, and always alive with electric currents of ideas, creativity, and daring design. It was out of this milieu that the Eames Soft Pad Chairs were born. Of course, being the products of Charles and Ray Eames, they succeeded in a huge way.

Charles and Ray Eames met when they were both at the Cranbrook Academy in Michigan, which was an art and design school. At the time, Charles was teaching in the design department and Ray was a student. They quickly realized their potential as romantic and creative partners, and it wasnt long before they were married and winning design competitions. Soon they moved to California; it was there they would make their stand and begin their lives as designers and as a married couple. At first they didn’t have too much going on. Ray worked as an illustrator for women’s magazines, drawing covers (covers which now fetch a pretty penny at auction) and pictures.

Charles was in Hollywood, working in set design and construction at Metro Goldwyn Mayer (MGM) and taking cast off parts of metal and wood home with him to experiment with. They were both obsessed by a single idea, a single design process that they were trying to invent in a small apartment with no funding. The Eames Soft Pad Chairs were nowhere near their minds at the time. They only thing they thought about was find a cheap, mass-producible way of bending plywood and molding it into 3D shapes. When they were finally able to accomplish that feat, they would be able to produce a chair they’d been dreaming about for years, the chair that would eventually be called the LCW, or the Eames Molded Plywood Chair.

For years they worked in anonymity, trying to come up with a solution to their problem. They built a little machine in their apartment and dubbed it “Kazam!” They needed lots of energy and heat to mold they plywood in the way they wanted to, and Kazam ended up being an aptly named little piece of business. Much too often they found themselves in the dark, having blown out the power to their entire apartment building once again and dreading the forthcoming ire and apologies.

But they were never deterred. When they couldn’t get enough power you could find Charles scaling telephone poles to get it, by hook or by crook. And when they couldn’t get materials, the junk piles at MGM were always there, waiting to be ransacked. Charles and Ray were very resourceful, and they made real progress. So much so, in fact, that they were able to work with the Navy during World War II to provide much needed molded plywood splints and glider shells made in their own little workshop. Soon, most of the battlefields in Europe and the Pacific had remnants of the Eames battlefield leg splint, which Charles had fashioned using his very own leg as a model. The money and the increased time which the operation with the Navy provided them was a huge boon, because they were finally able to make the chair they had been dreaming of so fervently for so long; the LCW.

But back to the story. The LCW got them an exhibition in New York, where the small distribution outfit they were working with was looking for more customers and bigger exposure to the design world around them. And boy did they ever get what they were looking for. The show was a huge success, and for one main reason; George Nelson was in attendance that day, and he decided then and there he wanted a personal audience with Charles and Ray Eames.

Nelson was a design pioneer, one of the great industrial designers of the century and a great critic, architect, and journalist as well. When the exhibit was being put on in the late forties, he was serving at Herman Miller as their Director of Design, a post he would hold for many years with great distinction and character. He got the post after having a great career designing and building. It was George Nelson who debuted the first Storagewall, who laid out the plans for the first urban pedestrian mall, and who invented the L-shaped desk we all know and love today. It was Nelson also who helped to make Herman Miller the absolute giant of home and office furnishing that it is today. And the first and most impressive way he built the company up to its present regard was finding, signing, and championing the work of great designers, including Charles and Ray Eames, the two designers he met on that day in New York City.

Without that meeting it is possible to imagine that all-time classics like the Eames Soft Pad Chairs, the Molded Plastic Chairs and the Nelson Swag Leg series might never have existed. Perish the thought. The three people became very good friends very quickly, and for years they fed off of each others’ creativity, insightful design, and drive. They worked together on projects without jealousy or selfishness. It was a lasting friendship that changed the course of 20th century design, and again, all because of a meeting in New York.

At this meeting, Nelson made it very clear he wanted the two designers to sign on with Herman Miller. And they did. Soon, the LCW was making news across the country and flying up the list of must have furniture. It sold and sold and sold, and the critics and designers of America and the world beyond absolutely loved it. TIME Magazine would later call the LCW the Design of the Century, and it’s hard to argue with them. It was into this success, and this partnership with Herman Miller and the connections Charles and Ray made with the larger design community, that the seeds which grew into the Eames Soft Pad Chairs were planted.

Charles and Ray Eames very soon became well known across the country. So well known that they came to work with a couple of designers (including Cranbrook classmate Eero Saarinen) who were engaged in creating a home for a wealthy engine maker in Columbus, Indiana. They wanted something special for the house that they couldn’t really find anywhere else, and they decided to ask Charles and Ray if they could just make it for them. They wanted chairs, and they wanted chairs that could be both indoor and outdoor chairs. Chairs that could withstand the weather and the elements, be comfortable, and be beautiful enough to also go indoors and not clash with the decor. Now thats a tall order. But unsurprisingly, Charles and Ray were up to the task.

What they came up with they called the Aluminum Group, and it was this group that led directly to the creation, decades later, of the Eames Soft Pad Chairs. The original Aluminum Group Chairs were, indeed, indoor outdoor creations. They were upholstered in mesh, and that made them easy to use outdoors without getting ruined. They were supported by polished aluminum, and that made them attractive and modern. They were shaped in a beautiful curve, and that made them classically stylish chairs. Immediately, almost everyone involved saw that these chairs were perfect for indoor use, and perfect for leather upholstery. The idea quickly shifted, from making idiosyncratic chairs for a single buyer into making amazing chairs for a legion of new buyers looking to improve the look of their homes and offices. These chairs, the Aluminum Group that was upholstered in leather and given the familiar profile we now know so well, were the progenitors of the Eames Soft Pad Chairs.

Up until that time in history, practically all indoor chairs had a solid and upholstered backing. It was just common sense to have either a hard or padded solid backing; even the LCW lived by the principle. But outdoor furniture, like hammocks and camp chairs, had a different (if less comfortable) approach. They created a sling for the user to rest his weight in, and they held it up by stretching it between two poles. It wasnt always comfortable or correctly measured, but it was a lot better than sitting on the ground. But the Eames Soft Pad Chairs and the original Aluminum Group took that idea, the idea of the sling, and made it comfortable — an indoor idea and a scientific, technical part of the chair.

Both groups of chairs feature two polished aluminum ribs that range up and down the seat and seat back. Between these two ribs, the leather is stretched taut. And that’s it to the casual eye. This creates a comfort pocket, in the same way hammocks and camp chairs create a sling. But the comfort pocket on these chair is different. Not only are the materials exquisitely comfortable, but each pocket is precise, measured, and repeatable to the Nth degree. They figured out a way to be precise with the sling, and make it actively inviting and comforting and supportive, rather than just sitting there. It was the first major chair not to use a solid back, and it was a huge hit. Years later, with the Eames Soft Pad Chairs, the technology is still sound and unimproved upon. The chairs are just as grand and comfortable today as they were four decades ago.

Another thing that the Eames Soft Pad Chairs took from the Aluminum Group was variety. There are four different types of Soft Pad Chair, and each one of them is specialized and unique, all the better to fit your life more precisely.