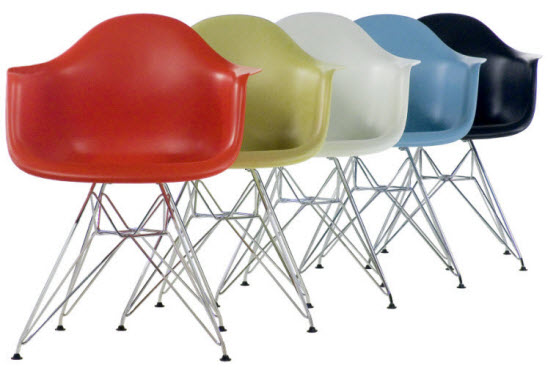 There aren’t many companies as committed to environmental issues as Herman Miller is, and few dealers as committed as we are at Smart Furniture. Over the many decades that Herman Miller has dominated the American fine furniture market, they’ve always put the health of the planet and of their workers and customers first and foremost. For every product they make, including the Eames Molded Plastic Chairs, there are careful and deliberate steps taken to make sure that the product and the company have a small and hopefully nonexistent footprint on the environment.

For their commitment to this process, Herman Miller and Herman Miller furniture has been the recipient of dozens of commendations and awards recognizing their contributions to the field, and for their noble commitment to corporate responsibility when it comes to manufacturing and production. This article will be a brief tour through all the steps that Herman Miller furniture goes through to become as safe and responsible as it can be, and how the company itself has taken huge steps toward total environmental safety and responsibility. One of those steps is working with Smart Furniture.

When you buy the Eames Molded Plastic Chair from us, the product is shipped to you in re-usable and recyclable packaging. That alone is a big step toward lessening the footprint of any given shipped product. When you receive the chair you can be comfortable in the knowledge that the piece of furniture you’ve purchased is not only beautiful and comfortable, it’s also responsible. One of the major planks of the Herman Miller plan to eliminate their footprint is to only work with vendors that do a great job of taking care of the environmental responsibilities their position requires them to handle. Being a Herman Miller vendor is in and of itself a stamp of environmental approval from one of the most progressive companies in the country.

But that’s not where it stops. The Eames Molded Plastic Chair is designed, built and shipped in factories and buildings that all subscribe to a strict and unyielding code; the Design for the Environment protocol, which is law at the Herman Miller manufacturing facilities at their Michigan headquarters and elsewhere.

DfE, as it’s called, is a far-ranging and bold initiative. It outlines a total blueprint for complete sustainability and zero waste by the year 2020. And at the rate the company is going, it might not even take that long. A new initiative, called “Perfect Vision,” sets out the 2020 goals as:

Each of those goals, on their own, would be huge accomplishments for any company. But to try and accomplish each and every one of them in just a decade is true commitment. It’s a comfort to know that when you buy your Eames Molded Plastic Chair, you’re not buying something that will inevitably end up in landfill, taking up space and exuding chemicals for decades after it’s outlived its usefulness. Because the chair is durable and the plastic is recyclable, you don’t have to worry. But Herman Miller even goes a step further; you don’t have to worry about any of the byproducts from the construction of the chair ending up in a landfill either, because they’ve taken every step to make sure that won’t happen. You can have confidence that not only will your chair be be a neutral presence in terms of environmental impact, but it has always been so, even at the factory stage.

You can also be confident that nothing in the plastic or wire of the Eames Molded Plastic Chair is harmful in any way. Herman Miller believes in chemically testing each and every one of their products at a molecular level to make sure they’re totally safe and environmentally friendly. Many of their chairs come with MBDC testings and ratings, which ensure in independent tests that the furniture is totally safe. And when you work with safe materials, in safe factories, with safe protocols, you end up not generating any hazardous materials and waste. And that’s a big victory in environmental terms.

One of the biggest stumbling blocks for factories is air quality and safety. Exhaust and fumes can be a deadly brew when it comes to the environment. That’s why the most responsible factories and businesses (and Herman Miller is one of these, if you can’t tell already) take great pains to limit their emissions. But Herman Miller is, as always, going a step further.

They want to totally eliminate air emissions by 2020, keeping the air around them and around their customers completely safe and secure, and keeping the environment as untouched as possible when it comes to air quality. When your Eames Molded Plastic Chair is being built, you don’t have to worry about air emissions, process water use, harmful chemicals or unnecessary waste. Herman Miller has taken all of the worry out of the process of buying furniture. You can trust them, and trust Smart Furniture, to make the right decisions about your furniture before you buy it.

Most companies don’t bother to update their building and factories to take advantage of advances in green energy and energy saving-bulbs and processes. There is a one time cost associated with these things, but in the long run, the businesses would actually save money. Herman Miller is never short sighted, and by 2020, all of their buildings will be using 100 percent green energy at all times.

No more wasted energy, no more waste at all; it’s an environmentally conscious consumer’s dream. Green energy is a wave of the future, and Herman Miller is making sure to ride it from the beginning, and for the right reasons (though the saving certainly don’t hurt!) When your Eames Molded Plastic Chair is built and shipped, you can be confident that the energy used to create it was safe, efficient, and green whenever it could be. And in 2020, “whenever it could be” will be “at every step of the way, 100 percent of the time.”

Another big step taken by Herman Miller is to make sure that all their building achieve a minimum LEED certification of Silver. LEED certification is one of the surest ways to get independent confirmation that you’re doing the right thing when it comes to environmental standards and practices. They examine your building and your building practices to come to a conclusion about how well you’re serving the environment. Are you using green energy? Are you creating waste? Do you appropriately regulate heat and AC? All these things and more factor into the decision, and Silver is one of the very highest ratings that LEED certification can give you. Herman Miller is indeed bold for making every building they own rise to that very high standard.

Perhaps the most impressive goal is the final goal; to achieve 100 percent of sales as green sales. Every product they create must meet exceedingly high qualifications already, but by 2020, they will have to meet DfE guidelines if they want to be sold. Luckily, the Eames Molded Plastic Chair fits the bill. But so does almost all of the Herman Miller catalogue, and very soon 100 percent of the catalogue. By putting their bottom line on the line, Herman Miller truly shows their commitment to environmental sustainability. By risking their financial status they show how much they care, and it’s truly inspiring. Of course, on the pace they’re running right now, they’ll never have to worry about losses; almost every one of their products already fit their high standards.

The Eames Molded Plastic Chair is one of these items. Although the chair itself is older and was built during a time when environmental standards hadn’t caught up yet, Herman Miller has taken many steps to make sure that the chair is safe and responsible. The original chair was built with fiberglass infused plastic, which wasn’t great for the environment and was hard to recycle. So the company made a change (not a cosmetic change; the chairs still look exactly the same as they always have) to a new kind of plastic, 100 percent recyclable polypropylene. The new material looks and feels and performs in the same way that the old material did, but it’s safer and more responsible. That’s a pretty good trade, for the company and for consumers.

When you by an Eames Molded Plastic Chair from Herman Miller, you don’t ever have to worry. That’s incentive in itself. You don’t have to worry about recyclability, or safe manufacturing procedures, or responsible corporate policy. Herman Miller has done all the worrying for you, and given you a product that’s beautiful on the inside and the outside, as the saying goes. You’ll be happy with your Eames Molded Plastic Chair not only because it’s great furniture, but because it’s great policy.