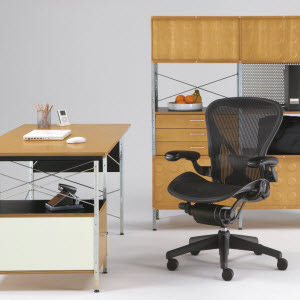 The Eames desk and storage collection is fully functional and fantastically well put-together, but its true strength lies in its aesthetic appeal. The collage of surface types and the use of open, empty space throughout their design set a new precedent for style in the 1950’s. The 9 of 10 ranking is a reflection more of the aesthetic feel of the collection.

The Eames Desk and the Eames Storage Unit are perfect for small and medium office, reception areas, and even lobbies. They’re beautiful and historically significant, and they bring a sense of fun and kid-like play to the drab world of the office. Highly recommended.

The Eames Desk and the Eames Storage Units are one of the more famous office sets in the Herman Miller collection. Designed by Charles and Ray Eames, and therefore possessing all the timeless design qualities and historical value those name bestow, the desk and the storage units have remained popular since their debut, half a century ago. They remain popular because they remain beautiful and functional, and their classic look and gold-plated pedigree accrue value with every passing year.

The desk and storage unit that is sold today from Herman Miller is identical to the one sold in 1960, 1970, 1980, and so on. They are notable for their colorful panels, their handsome and textured wood accents, and the metal legs and wires that keep them all together in an effective and beguiling package. The desk includes a single well-proportioned drawer with space between it and the top of the desk for more storage, and the plane of the desk itself is of medium size. Modern workplaces, where the laptop is generally the only major tool, are even more suited to this simple, pretty layout; they don’t need lots of nooks and crannies, or multiple drawers. The plane of the desk, the single drawer, and the playful, colorful aesthetic of the desk are just right for the apple generation.

The Eames Storage Unit is even more “mixed” than the desk when it comes to materials. The wood in the storage unit is carved and ornamented on some of the panels, and there are cabinets, drawers, and sliding doors on the largest model. Remaining are the eye-catching colored panels in blue, red, yellow, and white. There are several sizes for the storage unit. The 1×1 can go on the desk itself, the 1×2 as a sort of footlocker, the 2×2 as a smaller scale storage solution, and the 4×2 as both display and storage space (not to mention the art-installation feel it can give off in the right environment). These are very attractive, straightforward and highly functional pieces, with historic value.

Charles and Ray Eames are two of the great designers in the last century, and certainly the greatest design team that ever lived. In their long career they made films, toys, furniture, photographs, and movie sets, they drew magazine covers, they built homes, they taught, they put on exhibitions of math and science…the list goes on. They were indefatigable workers with a seemingly endless supply of creativity, matched with passion, discipline and a sense of fun. The Office Charles and Ray Eames is now a cultural landmark in California, as is the home they built for themselves. Their design for the LCW was called by TIME magazine the greatest design of the 20th century, ahead of a steam locomotive engine. They are vastly and justly celebrated.

They met in Michigan at the Cranbrook Academy, where Charles was teaching and Ray was a student. Soon they were married and settling in to California. Their first major furniture breakthrough was the molded plywood chair, for which they invented the process. In working with Herman Miller they soon would make the Eames Lounge Chair, the Eames Sofa, the Aluminum Group Chairs, the Soft Pad Chairs, the LCW, dozens of other pieces, and of course the Eames Desk and the Eames Storage Unit. They also made the world famous films Tops and Powers of Ten, the exhibition Mathematica, and Hang-It-All. They were whirls of activity and fun, and they left a massive legacy that is rightly celebrated as one of the most impressive in American history. You won’t find any chair anywhere with the designer pedigree that this desk and storage unit have.

Style is mostly what these pieces are about. The colorful, fun panels and the modern wires and metal legs are contribute to a mixed, creative aesthetic that’s sure to please. The storage unit and the desk are slightly different, in that the storage unit has more of a mixed surface, more of a collage-like style. The desk has the colored panels and then plain wood and metal accents. Both are vivid and eye-catching, and not at all dated. Even though they were built half a century ago, if you’d never heard of them before you wouldn’t be surprised if you were told they were first debuted the day before.

If the multi-colored panels aren’t really your thing, you can always adjust and go with single color panels. This too is an attractive design, as the proportions of the desk and panels are nearly perfect, but it definitely loses the pop and verve that make the desk and the storage unit stand out that much further from the crowd.

The most innovative thing about the desk is the stylization of it. At the time it was first sold, in the 1950s, there were no other desks quite like it. The office was thought of as a staid place, a solid and monotone place, where serious people did serious work. The relaxed and unmistakably playful Eames Desk and Eames Storage Units turned that on its head when they burst on the scene. Suddenly the office was a place to truly decorate, to give a style of it’s own, and to display bold, vibrant colors (and plenty of them).

Other than that, the desk is quite simple, and purposefully so. There is only the single drawer and the plane of the desk. The storage unit is more interesting and complex from an innovative standpoint. It mixes different styles of storage like display, sliding door and cabinet in a single product. Nothing earth shattering, but the stylization and the functionality keep this gem of a office set popular and critically adored.