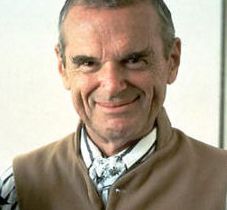 Charles Eames was the driving force behind the Eames’, and before he met his wife Ray, he worked very successfully for many years. It was he who founded the architectural office in 1930, and he who set the tone for the earthy, radical designs that would make them famous.

Born in St. Louis in 1907, Charles showed an interest in architecture and engineering, pursuits in which he also showed a significant aptitude. He attended college at Washington University in St. Louis but was kicked out after two years for championing Frank Lloyd Wright and for being, according to one professor, “too modern.” Undaunted he began working on his own, and began building the ideas and the concepts that would inform Eames furniture in the future. When he was just 23 he opened his own office, and soon was invited to accept a fellowship at Cranbrook Academy of Art in Michigan. He quickly became the head of the design department, where he proved his worth by taking first prize (along with colleague Eero Saarinen) at the Museum of Modern Art’s “Organic Furniture Competition.” The design was for a chair. The material? Molded plywood, the material on which the Eames’ would make their name. Eames furniture began at the Cranbrook Academy as well, where the assistant who helped Eames and Saarinen prepare their designs was named Ray Kaiser.

Charles Eames met Ray Kaiser in 1941, and very quickly they were married. So began the odyssey of one of the most fruitful collaborations in art and design history.

After moving the company to California, Ray and Charles began to make products for the Navy out of their Charles’ now famous molded plywood. Eames furniture built splints to be used in the field, stretchers, and experimental shells for gliders and various planes. At the end of the war, the Eames’ molded plywood chairs began to be manufactured by Evans Products, and their influence and popularity exploded. Critic Esther McCoy even referred to molded plywood chair as the “chair of the century.” It was no exageration: The Eames molded plywood chair broke all the barriers of style, design, aesthetic appeal, and materials. The design world was never the same, and the modern era was born out of a curious and innovative new process that allowed Charles Eames to bend wood however he wanted.

But Charles Eames was not limited to architecture and design. His interest in photography developed into a series of groundbreaking and fascinating short films. The short films covered furniture making, toys, and mathematics: often they were commissioned by the Eames-loving IBM company. Eames furniture went on to do several divergent, yet diverting, project. This included toy-making, including the famed House of Cards game given to the winners of the Nobel Prize, and the popular Eames flip-books. Charles Eames also designed scientific exhibitions and museum displays, and became a pioneer in scientific popularization with exhibitions like “Mathematica: a world of numbers…and beyond” and “A Computer Perspective: Background to the Computer Age.” He even dabbled in history, designing “The World of Franklin and Jefferson” in 1975.

Charles Eames worked with his wife from the time they were married, but they also knew Eames furniture needed more than two good heads, so they hired Henry Beer and Richard Foy, among others. The Office of Charles and Ray Eames was a California landmark for forty years, along with the Eames Residence (or as they called it, Case Study House #8), which had been built in a matter of days, by hand, using only pre-fabricated materials.

A man of wide interests, intellectual curiosity and dazzling talent, Charles Eames left an indelible mark on furniture, filmmaking, exhibitions, toys, and architecture. His contributions to American society and American enterprise are vast and important, and without him modern America would be much different, a poorer place to live and work.